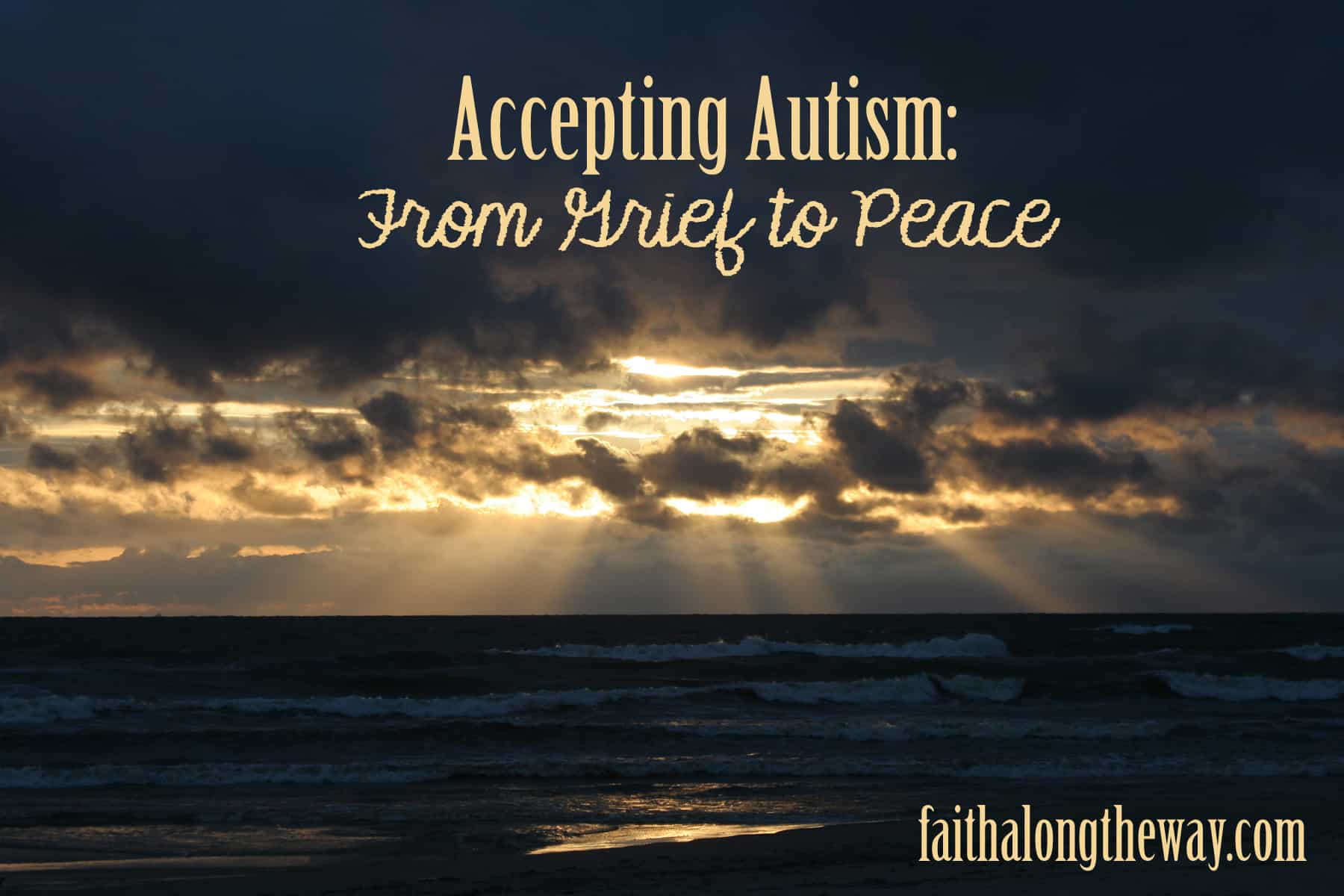 On August 28, 2013, I stared my greatest fear in the face when the word Autism was used to describe my daughter for the first time. Our lives changed forever with that one word, and in that moment, I knew that nothing would ever be the same. I had a sinking feeling that the road to accepting Autism would be paved with heartache.

Tears slipped from my eyes as I barely comprehended the voice of the psychologist above the rapid beating of my heart. I felt panicked, sick and wanted to fast forward time.  I wanted to be myself a year from then, having processed this news, weighed my options and having come to a place of accepting Autism and all that went with the diagnosis.  But for this moment, time stood still as I realized that I am now the parent of a special needs child.

In my sorrow and disbelief, I felt the quiet whisper of the Lord impress upon me, “I am here.” Yet I had already known He was there. I had already felt His presence in that room; as He held my hand and reminded me of His strength and power.  Over the past few years He and I had grown quite close, as He helped me through a series of storms that I could not have weathered without Him. He had become my anchor, my lifeline and my hope, not just in times of hardship, but in the everyday mundane as well. And I was going to need Him more than ever.

In a blur, life went on as though nothing had changed and I began to process the news. In the beginning I was upbeat and almost overly positive when I thought about what Autism would mean for us.  Already Joy had beaten a few odds since she was somewhat verbal and somewhat interactive.  I clung to the hope that with therapy, she would beat Autism and would eventually go into the general education classroom without the quirks that put her on the Spectrum.  I just knew that she would get better.

We started her on a Gluten-free and Casein- free diet, also nicknamed the “Autism Diet,” in hopes that her symptoms, such as the hand flapping, would lessen and our girl would be freed from the confines of Autism.  With the diet I was cooking non-stop and constantly researching foods to prepare new dishes that she would love.  While we saw a significant breakthrough in interaction and speech within weeks of starting the diet, the downfall of the diet was that it was feeding my own personal denial.

I was in denial that my child had a disability and that there was no cure. Sure there were diets and therapies to help grow her to her maximum her potential, but no miracle cure that I was searching for.  Within weeks of starting the GFCF diet, I was exhausted from cooking and felt beaten down by life. The cocoon of denial I had built for myself came crumbling down around me.

I had finally started to grieve.  And I was grieving hard. To me it was the death of the dreams and plans I had for my baby girl.  Gone were the visions of her wedding day, the day she would become a mother and living a life independent from her dad and me.

Instead those dreams were replaced by questions.

Would she ever be able to talk fully?

Would the tantrums that haunt my dreams go on forever?

What type of mental capabilities does she have?

Will she ever be able to be potty trained?

What happens when she hits puberty and starts her period?

What does her future hold?

Will she be able to live independently and hold down a job?

What will happen to her when we die if she needs to be taken care of?

I was constantly in a fog that had a hold of me and wouldn’t let go. I was bogged down, oppressed and could barely do my life. I struggled to take care of my kids and would often burst into tears in front of them; sitting on the floor and crying while they played around me. It was not uncommon for me to cry up to 5 and 6 times a day.  The fact that Joy thought my crying was hysterical, only made me cry harder.

In all of my trials, I had never truly been in the pit of despair until then.  I was broken and my plans for our future had been shattered beyond recognition.  How would normalcy ever find me again? I was not even a shadow of the person I had been and retreated from almost everyone except for family and my Bible study friends.

I was seeking answers to the many questions I had about how our life would work now and how I could come to a place of accepting Autism.  I knew in my head that eventually the fog of depression would clear but I didn’t see how.  In my limited view, there was nothing about the situation that could change and my life would be forever lived in the darkness, with a cloud of grief following me around.

My grief started manifesting itself in physical symptoms as well.  I had constant chest pressure and felt like someone was crushing my chest with their hand. I was restless and even if my children let me have a good night’s sleep, I was so plagued by fear and anxiety that sleep usually eluded me. I felt as though I was being eaten from the inside out by bitterness and brokenness, which I couldn’t seem to shake no matter how hard I tried.

But I was desperate to hear from the Lord and was searching His Word every chance I had.  I felt a camaraderie with the psalmists, many who had been pleading with God about their situations and questioning how God could allow disaster in their lives, because that was me too. I felt like Job who had been afflicted time and time again by the Lord, yet still praised Him.  I identified with Habbakuk, who cried out to the Lord, over and over again, asking why.  I too was crying out to the Lord, pondering His plan and seeking refuge from the storm.

I spent three months in the pit of despair, all the while clinging to the promises of His Word.  God would send His power, strength and might to me each morning during my time with Him.  Each day, I would journal, write sticky notes with Scriptures on it and repeat my favorite phrase to myself 100 times a day, “The joy of the Lord is my strength.” Each day God was faithful to chisel away a little bit of sorrow, despair and my unsettled spirit.  Each day He was faithful to get me through the day living on His promises alone, and not my own strength.

And slowly, over the course of three months, God made beauty from ashes and restoration began. His Truths broke through the darkness and unshackled my chains of grief, one by one, until a new me had emerged. This new version of me was still a far cry from perfect and I struggled with a daily temptation to let the fear of the unknown take over, but I was humble and focused on the Lord FULLY for the first time ever.

I had a revelation abut the true meaning and purpose to my life.  It is not about having the picture perfect family that lives in a beautifully decorated Pinterest home, it’s about surrender.  Surrendering EVERY SINGLE THING about myself; my hopes, my dreams and my family each day to the Lord.  It’s about seeing this world, lost and broken as it is, through the eyes of Jesus and longing to help those who don’t know Him find peace and hope.  It’s about being a LIGHT to others in a world marred by sin and shame. Ultimately, life IS NOT ABOUT ME!

I no longer hold our future with clenched fists, with my list of ideals of how our life will look. My idea for the future is now imagined with open hands, raised high to the heavens, asking God to lead the way and I now see His plan as my desire too.

God has taught me to let go and release,  like a cluster of balloons, my hopes and dreams for my precious baby girl, too.  There may not be dance recitals to brag about or an honor roll sticker to grace the bumper of my car, but it doesn’t matter. God showed my that it didn’t matter what her IQ score would be, whether or not she would be a self-sufficient adult or if she would ever live independently apart from us, her life was EXACTLY how He created it and it was beautiful because she was His child.

She has a purpose that can only be fulfilled through this journey called Autism. Her purpose, although it looks different to outsiders, is NOT LESS!

Through my mourning, God showed me a “list of truths” for my weak moments. I have clung to these as well as His Word and revisit them often. Here’s a glimpse of my lessons learned in the dark.

1. I am not God and can trust Him for the details of her future and don’t have to be afraid. As her mom, I don’t have to know what her future holds, but each day, take a step of faith in believing God’s promise to navigate the waters of Autism for us.

1. Joy’s Autism is NOT a mistake.  He made her EXACTLY the way she is and sees her as complete and whole. She was made in His perfect and holy image.

2. God is still good, even on my darkest days and I am in the pit of despair.  Praise Him anyways.

3. Nothing is too big for God to handle, including Autism. While this diagnosis seemed overwhelming and daunting, God the Creator of the Universe, is in complete control of this situation.

4. If we let Him, God will use Joy’s life and Autism for His glory. Instead of remaining in the dark, I had to open my eyes to see the light of His glory and power.  This blog was a calling by Him to use our trials for His glory.  May the story of Joy and our family somehow bless the lives of others and His name be glorified in the process.

5. We are BEYOND proud of who she is and will REJOICE in the Lord for every milestone she reaches.

6. I am blessed and humbled that God chose me to be her mom. He is refining me each day as I learn how to parent her and help her grow to the best of her abilities.

7. While a diagnosis may be life changing, it is not life defining!

My life is living proof that God restores the brokenhearted and makes beauty from ashes. In my own humanity, I was not able to accept Autism, but with healing from the Lord, I embrace that there is a beautiful life to be lived, diagnosis or not. Whatever you are going through, no matter how big it may seem, God longs to do the same for you; to hold you, give you peace and show you the way.

Are you in the darkness and in the pit of despair?  Look up, see the glory of the Lord and know that you are not alone.  If I can pray for your situation of darkness, please write your request in the comment section below.  If you are not wanting to share details, that’s ok, just write unspoken and it would be my honor to pray for you in your time of need! 🙂

This post was linked to Missional Women and the Joy Dare Blog.