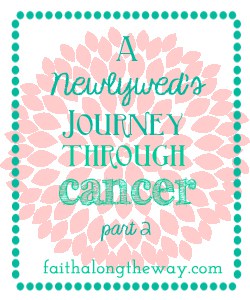 If I’m being completely honest, I was angry at how unfair and unjust a second cancer diagnosis seemed. I knew that once again I was surrounded by the presence of the Lord and that He would fill me with his peace, if only I would turn to Him for the help I so desperately wanted.  But I didn’t feel Him.  I knew He was there, but I felt distant and was filled with questions that on some days, resembled bitterness.  I was consumed with my unanswered thoughts swirling through a brain bogged down with anxiety and a pinch of depression.

Hadn’t we suffered enough through the first trial of cancer?

What had we done to deserve the noose of cancer weighing us down yet again?

What does the prognosis of an almost 30 year old man look like if his cancer had returned so quickly?

Why did other people seem to skate through life yet our circumstances were always so burdensome?

These were just a few questions floating around in my mind at the time Hubs was told his cancer had returned.  Gone were the cheery, optimistic comments about a 99% survival rate.  This time the cancer was in a lymph node and an intense chemotherapy regimen was scheduled.  My sweet, strong Hubs was to endure a grueling two and a half month chemo treatment.  The intensity of it surprised us both; spanning 5 days a week, 8 hours a day.

He couldn’t work during this time, yet God provided financially for us through the faithful giving of His people.  My co-workers took a collection for us and demonstrated Christ’s love in a humbling way.  God provided for us in tangibly, yet anxiety continued to plague me and I could not shake the feeling of disease that had encroached upon my happy life.

Being a teacher with summers free and the calendar quickly approaching the end of May, I prepared for the summer with a heavy heart.  I would spend it day- in and day-out by Hubs’ side as he received his treatments.  Supporting him any way I could was my focus, yet I was terrified of what I had nicknamed “the chemo ward.”  Selfishly I wanted to fast forward our lives a few months until the chemo was over and he was once again in remission or basically do anything instead of facing what would soon lie ahead.

I will never forget the first treatment. Packed down with enough gear to entertain us for 8 hours, we entered cautiously, not knowing what to expect.  Welcomed by the friendly faces of the nursing staff, I exhaled, reminding myself that God is my strength, fortress and help always, but especially in times of trouble.  Once again, God’s Word provided the peace and comfort I was desperate for at the exact moment I needed it most!  He is beyond faithful to His children!

Hubs was then hooked up to an IV to dispense his three drugs, and we waited and prayed as medicine coursed through his veins.  My anxiety over life inside the ward was easing with each passing moment.  In fact, I was amazed at the scene that was unfolding before my eyes.

Instead of death, I saw a second chance at life.

Instead of frailty, I saw strength.

Instead of despair, I saw hope.

Instead of solitude, I saw a community of soldiers, banding together to beat the enemy, encouraging each other and offering words of support every chance possible.

These people, mere innocent victims of a ruthless disease, were my new heroes and I KNEW that this journey was not only doable, but if I let Him, God would use this disease somehow to impact the lives of other people and bring glory to His name.

It was then that I relaxed a bit and settled into our “home-away-from- home” for the next several months.

We quickly established  a daily routine around the ward.  Hubs chose not to have a port installed and our mornings began with poking and prodding as nurses fished for a vein. Once hooked up, we would alternate between using the laptop, reading, talking, sleeping and just sitting together.

Hubs continued to amaze me on a daily basis.  Not only was he physically strong, responding to the treatments with minimal side effects, but his spiritual strength inspired me, who continued to wrestle with the weight of yet another storm in our life.  I was the one angry and bitter yet I was not physically suffering as he was.  I was experiencing the faithfulness of God’s power, the peace from His Word and the guidance of His path every day, yet I still struggled with the “whys” of this disease and how God could filter this through His hands and allow it it happen yet again.

On days when Hubs’ strength was zapped and nausea hit like waves, his joy in the Lord never diminished and instead of me catering to him, Hubs inspired me moment by moment. He was completely at peace with the Lord and had submitted to His will for our lives, no matter what that meant.

Other than the hum of the machines and the quiet murmurs of fellow patients, the ward was quiet and peaceful. It was in these quiet moments that God healed my anger and restored my heart.  Although my heart was more fragile than before, it fully belonged to God, and that was what mattered.

Through the wrestling and questioning, I could sense God’s spirit changing me. I was learning, for the first time in my life, to fully submit my will to His.  Growing in faith every step of the way, I laid my precious Hubs at the feet of Jesus, ready to accept God’s will for our lives, NO MATTER WHAT!

That was a huge leap of faith for me to release my husband to God, not at all sure of the outcome and fully realizing that God’s will may be to take him from me.  That was the most difficult prayer I had prayed to date but the most freeing.  Letting go of my vision for our lives and embracing God’s plan instead, released months of pain, anxiety and overall despair. I didn’t have answers or a crystal ball to gaze into the future, but I was willing to serve God on His path, no matter what happened.

The months of chemo passed in a blur and finally summer and Hubs’ treatment had come to a close.  Test results were in and once again Hubs was in remission!  I praised the Lord for His faithful strength and peace, and of course for laying His healing hand on my love.

But I realized that even if the healing had not come, I would have praised Him anyways because of who He is.

He is God; my Heavenly Father who created me in His Image.

He is my Savior; who forgave my sins and showed me grace by erasing them as far as the east is from the west.

He gave me eternal life through His Son Jesus even though I did not deserve it!

THAT IS WHY I PRAISE HIM!  For who He is and what He did for me at the cross, not because of temporary situations here on earth.  While I am beyond humbled at the healing that Hubs was given, this journey had brought me full circle and I now knew that whatever the situation, I could and would PRAISE THE LORD IN A STORM!

Update: In June of 2014, Hubs will celebrate SEVEN YEARS IN REMISSION!!!!  We continue to praise the Lord for His healing!!!

This post is dedicated to everyone who has battled cancer or loved a victim of this disease!  Let’s pray for a cure!

This post was linked to Heart Filled Fridays @ Womanhood with Purpose.